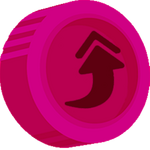 Rebirth Tokens are a form of currency used to buy valuable items from the Rebirth Shop, including top-tier cosmetics and permanent tools and backpacks (which are not lost upon rebirth). During the Anniversary 2019 Update, they could also have been used to purchase the Party Pet.

The most obvious way to acquire Rebirth Tokens is by rebirthing, granting 20 Rebirth Tokens each time you do so. However, several long-term objectives also provide these:

Rebirth Tokens can be bought with Robux as of the Mythical Items update in early June 2018. In addition, buying 2x Tokens costs 400 R$.

List of items currently available in the Rebirth shop: Tools can be enchanted with tokens' base and max enchant levels listed.

Items purchased with Rebirth Tokens are permanently unlocked and will stay with you when you rebirth.

To edit a tab's content, go to Mining Simulator Wiki:Tables and find the tab you want to edit.

List of items no longer available in the Rebirth shop:

In addition, Rebirth Tokens can buy items not directly in the shop. Tools obtained with Robux or in a Pack can also be enchanted with tokens, and the Light Pack is able to be purchased for 35,000 Tokens.

Community content is available under CC-BY-SA unless otherwise noted.
Advertisement